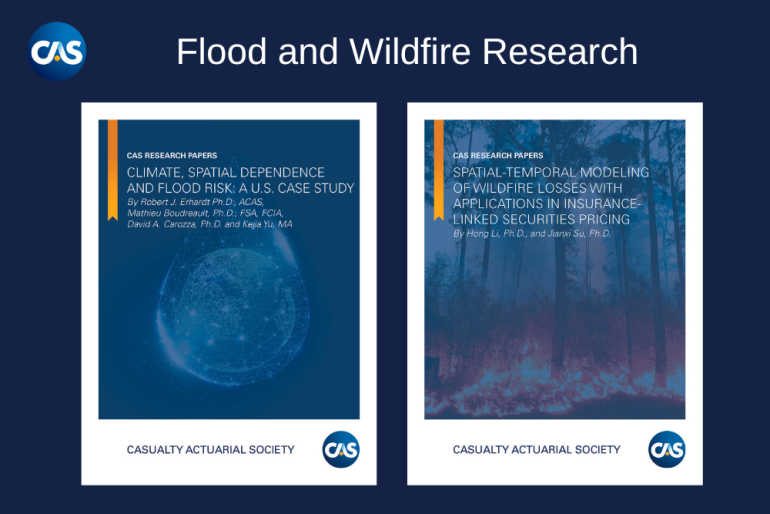 Flood represents one of the costliest and most disruptive natural disasters in the United States, and the economic losses from flooding are trending upward. In “Climate, Spatial Dependence, and Flood Risk: A U.S. Case Study,” the authors merge data on economic flood losses, historical climate, census population, and geological characteristics to explore drivers of flood losses and climate trends. The paper illustrates that flood losses exhibit spatial dependence that requires spatial statistical models; climate variables are partial drivers of increased frequency and severity; and measures of spatial dependence have been changing over time. Through a simulation study, the authors lay a groundwork to disentangle climate and non-climate drivers of these changing measures of spatial dependence. The paper is authored by Robert J. Erhardt, ACAS; Mathieu Boudreault; David A. Carozza; and Kejia Yu.

In the wake of climate change and human activities, wildfires have caused mounting damages over recent years, especially among the western states in the United States. In “Spatial-Temporal Modeling of Wildfire Losses with Applications in Insurance-Linked Securities Pricing,” authors Hong Li and Jianxi Su model and predict state-specific wildfire losses in the U.S. using a combination of Bayesian dynamic models. In particular, the wildfire frequencies are modeled by the Bayesian multi-scale Dynamic Count Mixture Model (DCMM), which is capable of capturing a number of stylized features of wildfire data, including zero-inflation, over-dispersion, and time-varying patterns. Further, the DCMM is able to incorporate spatial dependence of different states, and thus improves the forecasting performance for individual states, especially those with low historical wildfire frequencies. The predictive distribution of future wildfire loss is used to study the pricing and hedge effectiveness of wildfire catastrophe (CAT) bonds.

“These papers represent two great additions to the Casualty Actuarial Society’s existing and growing body of literature on large-scale natural disasters," said Brian Fannin, ACAS, CSPA, CAS research actuary. “It is our hope that the insurance industry and the general public will benefit from this work.”

“Actuarial researchers may take particular interest in the adoption of Bayesian techniques to assess wildfire risk,” Fannin added. “This enables us to begin to develop estimates for wildfire risk in parts of the United States which have not – as of yet – experienced significant events like those associated with the American west. Researchers who are modeling flood risk will be glad to know that the flood paper makes extensive use of data that is publicly accessible, facilitating its integration with existing techniques. With these papers, the CAS continues its work of providing leading edge tools and research to facilitate sound financial risk management.”

The papers join other recent CAS research related to climate risks that can accessed via the Research Papers landing page. CAS Research Papers are funded, peer-reviewed, in-depth works focusing on important topics within property-casualty actuarial practice. CAS Research Papers fulfill the goal of creating an important addition to the existing body of CAS literature and give CAS members access to relevant information and resources applicable to their work, which can help advance their careers.