Thank you to all the candidates who filled out our survey in September! It was sent to all candidates who were registered for an exam in the last two years minus FCAS. We conducted our first survey in 2019 and got great feedback for our committee and the CAS. We would like to share some of the early 2021 survey results with you. Look for a more detailed article in a future issue or blog post!

One of the survey topics was Future Fellows itself. Seventy-seven percent of those surveyed were newsletter readers, up 2% from the 2019 survey. Surprisingly to us, 257 candidates out of 387 (66.4%) prefer to read the print version of Future Fellows as opposed to the online version. As more of our world becomes paperless, this preference for print is interesting and good information for the Candidate Advocate Working Group (CAWG) as we consider the format of Future Fellows going forward.

Regarding subject matter, candidates maintained their level of interest on articles on book reviews, membership, CAS updates and governance, career advice and the P&C industry. Both topics of exams and study tips increased in interest, so look for more articles on exams and studying in the future! At times the CAWG has thought that we have too much exam-related content, but the survey has shown us there’s no such thing as too much when it comes to exams.

Interestingly, while many candidates read Future Fellows, not many candidates knew about our Hot Topics blog, yet most want us to update it monthly or quarterly. We will brainstorm future blog article ideas and ways to increase its visibility, so if you have suggestions, please email us! We love input from our readers.

The new CAS website was another revealing survey topic; 48.8% of individuals stated they can often or usually find answers to their questions on the CAS website. If they struggle to find the answer from there, most individuals will attempt to solve these issues by going down the following avenues:

A remaining 12% of users let their questions go unanswered and only 3% of surveyed candidates don’t have questions. We would like to remind candidates that the CAWG is also able to answer questions! You can contact us directly via our email address CAWG@casact.org.

There was a significant increase in candidate satisfaction found with the CAWG, which rose from a score of 2.85 in 2019 to 3.42 in 2021 on a scale of 1-5. This can be attributed to multiple achievements including the following:

Not surprisingly, most candidates (60.4%) first heard about the CAS as university students. The CAWG plans to engage with the University Liaisons this year to strengthen ties between the two groups. The rest mostly heard about the CAS when looking for employment (19.4%), from their employer (8.3%) or in high school (7.0%).

A section of the survey focused specifically on the CAS credentials themselves since that’s the primary objective of candidates taking exams. Out of 443 responses, 257 (58.0%) people felt they didn’t need more credentials other than ACAS/FCAS to get the job they want, 107 (24.2%) felt they did need more credentials, and 79 (17.8%) weren’t sure. Given that the primary audience of the survey is ACAS candidates and candidates who had achieved ACAS and pursuing FCAS, it makes sense that the majority believe ACAS/FCAS credentials are sufficient for the job they want. However, only 32.5% of candidates believe the additional time and effort it takes to achieve the FCAS after achieving ACAS is worth it, 47% of candidates weren’t sure that it was worth it and 20.5% thought it wasn’t worth it.

Survey responses indicate several upcoming challenges facing the actuarial professions, with the largest portion of concern coming from the growth in the fields of data science and predictive analytics. We can see a similar story being told when we asked candidates what additional credentials they would like to obtain; a majority of responses mention a data science or computer programming credential. Another major challenge perceived by candidates facing the profession is that it is confined to insurance.

In regard to diversity, equity and inclusion (DE&I), 50% of surveyed candidates feel the CAS’s efforts at building diversity in the actuarial profession are appropriate or more than adequate. 65% feel the CAS has a role in supporting the insurance industry’s discussions about race and insurance pricing and practices. The majority of people surveyed believe that enhancing the diversity of the candidate pipeline is the top priority for the CAS’s diversity efforts.

The aspects of DE&I that candidates value most in an employer are as follows (out of 389 responses):

There were also some interesting changes in the demographics of survey takers. Those identifying as female in the 2019 survey were 38.9%. This amount increased to 43.1% of those surveyed in 2021! There was also an increase from almost none to 1.5% of people identifying as neither male nor female. 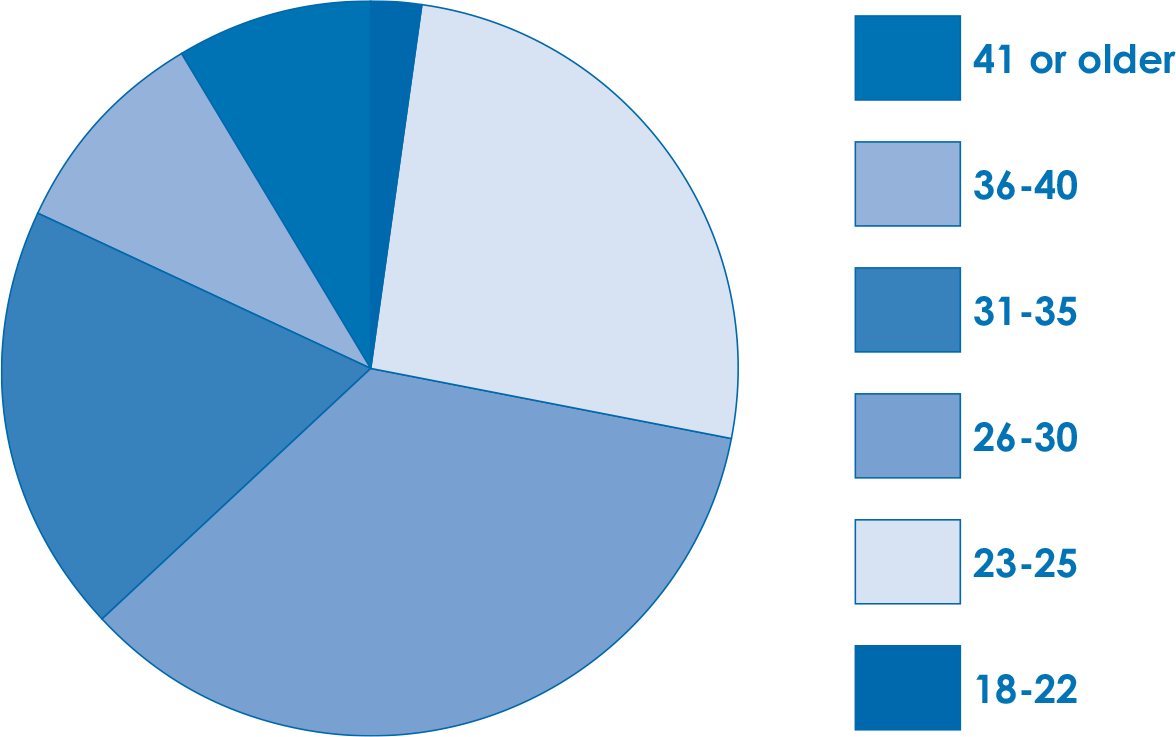 Look for future survey results articles as we finish processing the wealth of data that we received. CAWG also plans to examine the results for actionable items and will be sharing the survey results with CAS leadership. If you didn’t get a chance to fill out the survey but still want to share your thoughts about the CAS with us, please email us at CAWG@casact.org and respond to future surveys.

Keep up with the latest CAS news