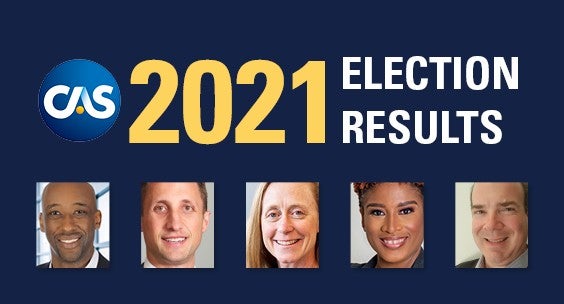 Roosevelt Mosley has been elected President-Elect.

Justin Brenden, Kathy Olcese, Yvonne Palm, and Jason Russ have been elected to the Board of Directors.

According to the election procedures approved by the Board, all vote counts are released to the membership. These follow:

In addition, as previously announced, while a majority of CAS Fellows voted in favor of proposed changes to the CAS Constitution and Bylaws to streamline the governance of the Society, the proposal did not achieve the necessary threshold required for approval. Constitution and Bylaws changes require an affirmative vote from 10% of the Fellows or two-thirds of the Fellows voting, whichever is greater. The vote counts on the Bylaws proposal are as follows:

Congratulations to the new President-Elect and Board members. These members will assume their positions at the close of the 2021 Annual Meeting in November.

On behalf of the CAS, I thank all of the candidates in the 2021 elections for their willingness to run and, for those elected, your servitude and leadership in the CAS.